Small States Are Not Helped by Current System

We've all heard that low-population states are especially influential in electing the President because each state gets extra electoral votes corresponding to their Senators.

Small States Do Not Have Disproportionate Influence in Picking the President, but, instead, have Virtually No Influence because They are One-Party States in Presidential Elections

However, the political reality is that the current system decreases the political clout of small states in presidential elections.

Far from being “protected,” the eight smallest states are the most disadvantaged and ignored group of states under the current state-by-state winner-take-all method of awarding electoral votes. 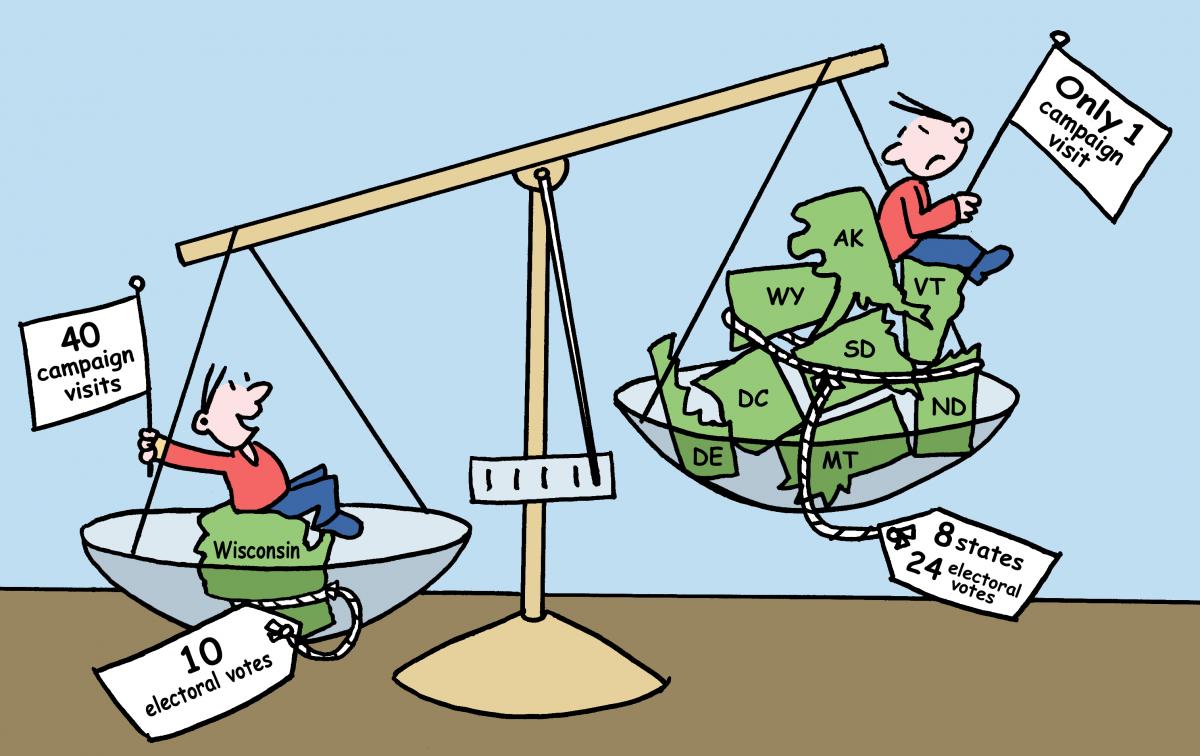 There were 952 general-election campaign events during the 2008, 2012, and 2016 presidential campaigns.  However, only one of these 952 events occurred in the eight smallest states.  As can be seen from the table, seven of the eight smallest states were totally ignored in all three elections.  The District of Columbia received one isolated event in 2008.

The reason why the small states are ignored in presidential campaigns becomes clear if we expand the discussion to the 13 smallest states (i.e., states with three or four electoral votes).

The reason why New Hampshire received so much attention is that it was a closely divided battleground state in these three elections.  The Democratic nominee received 55%, 53%, and 50.2% of the two-party vote in 2008, 2012, and 2016, respectively.  Thus, both parties campaigned vigorously in New Hampshire because each perceived (correctly) that they had something to gain by campaigning in the state and something to lose if they didn’t.  Note that the candidates campaigned unusually vigorously in New Hampshire in 2016 when the race was far closer (50.2%) than in 2008 or 2012.  There were 21 events in 2016, compared to only 12 and 13 events in 2008 and 2012, respectively.

Maine received two events in 2008 and three in 2016 because Maine awards electoral votes by congressional district.  The Democratic nominee easily won the non-competitive 1st district in 2008, 2012, and 2016 and easily won the state as a whole in all three elections.  That is, the state as a whole was not competitive.  However, Maine’s 2nd district was closely divided in two of these three elections (2008 and 2016).  Because the presidential candidates perceived (correctly) that they had something to gain or lose in Maine’s 2nd district in those particular elections, they campaigned there.  Indeed, Donald Trump carried Maine’s 2nd district in 2016 and thereby won one electoral vote from Maine. 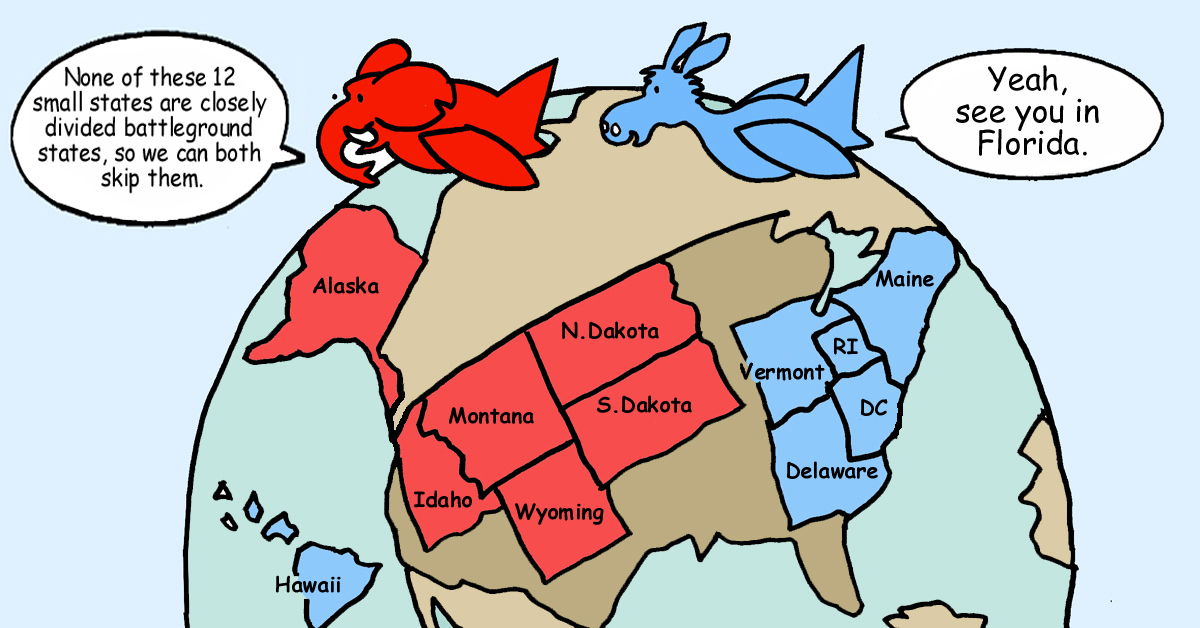 The small states are not Republican

Contrary to myth, the small states (the 13 states with only three or four electoral votes) are not predominantly Republican in presidential elections. In fact, they are substantially tied. The 13 smallest states have split 7-to-6 (or 8-to-5) in favor of the Democrats in all but one presidential election since 1992. They have split 6-to-7 in favor of the Republicans once. 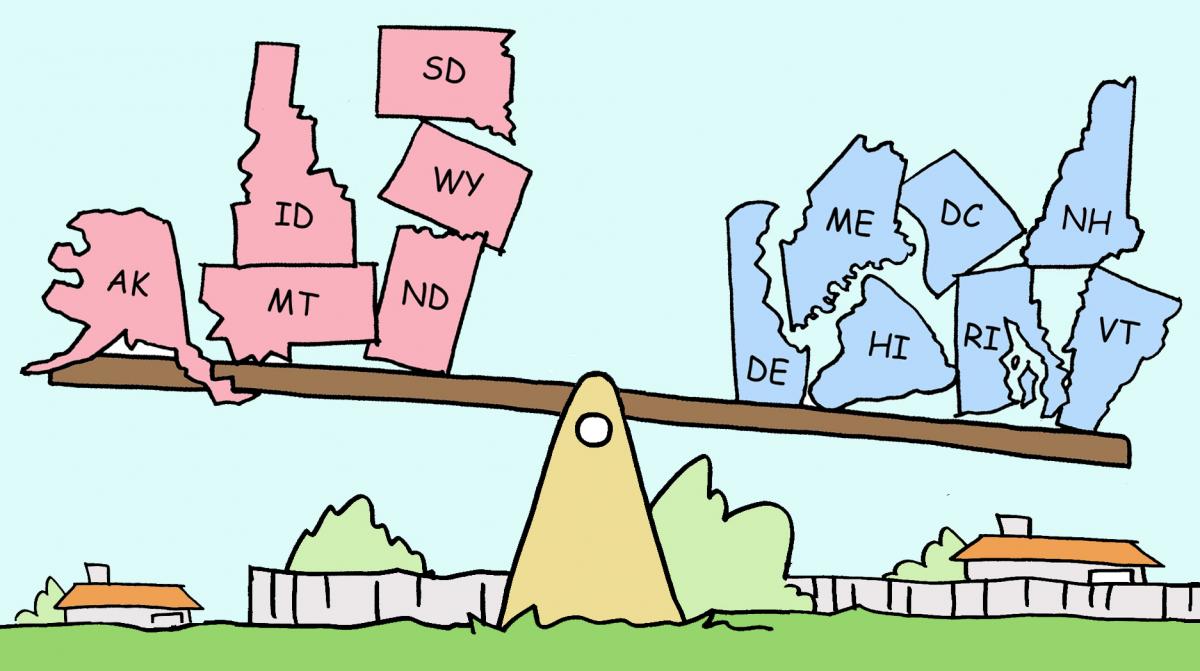 Trump did not win because of small states

Another indication that small states do not benefit from the current system is that Delaware, Hawaii, Rhode Island, Vermont, and the District of Columbia are among the 16 jurisdictions that have enacted the National Popular Vote interstate compact into law.

A nationwide vote for President offers a way for small states to make the votes of every one of their voters count directly toward the presidential candidate of their choice. It would make each of their voters as influential as a voter in Wisconsin or elsewhere.