The U.S. Constitution specifies that the President and Vice President of the United States are to be chosen every four years by a small group of people (currently 538) who are individually referred to as “presidential electors” and collectively referred to as the “Electoral College.”

Every 10 years, the 435 U.S. Representatives are reapportioned among the states in accordance with the latest federal census, thereby automatically reapportioning the membership of the Electoral College among the states.  The map below shows the number of electoral votes for each state, according to the 2020 census. 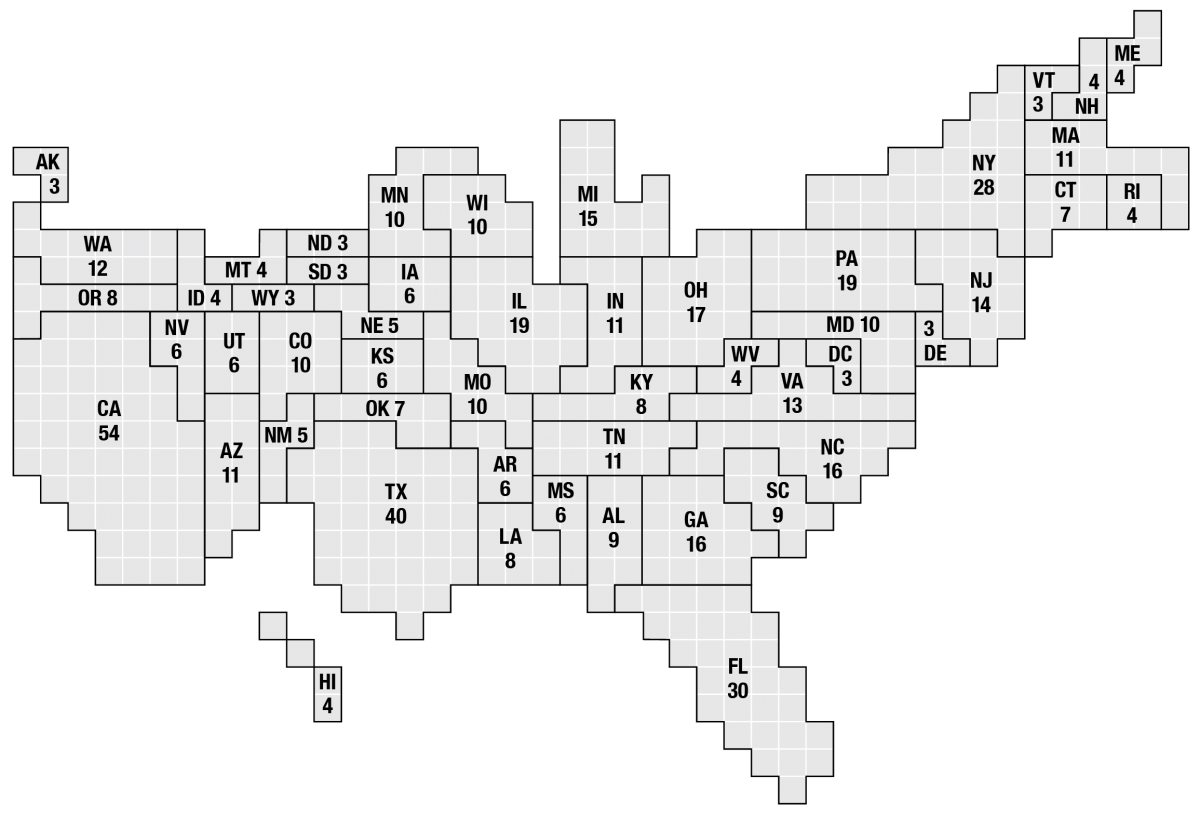 Members of the Electoral College are elected by each state and the District of Columbia on the Tuesday after the first Monday in November in presidential election years. In 2020, Election Day is Tuesday November 3, 2020. This date is set by a federal law passed by Congress, and may only by changed by Congress.

“Each State shall appoint, in such Manner as the Legislature thereof may direct, a Number of Electors, equal to the whole Number of Senators and Representatives to which the State may be entitled in the Congress….”

As the U.S. Supreme Court observed in the 1892 case of McPherson v. Blacker:

“In short, the appointment and mode of appointment of electors belong exclusively to the states under the constitution of the United States.”

In 2000, the U.S. Supreme Court in Bush v. Gore reiterated the principle that the people have no federal constitutional right to vote for President or Vice President or for their state’s members of the Electoral College..

“The individual citizen has no federal constitutional right to vote for electors for the President of the United States unless and until the state legislature chooses a statewide election as the means to implement its power to appoint members of the Electoral College.”

The Constitution’s delegation of power to the states to choose the manner of selecting their members of the Electoral College is unusually unconstrained. It contrasts significantly with the limitations contained in the Constitution on state power over the manner of conducting congressional elections (Article II, section 4, clause 1).

“The Times, Places and Manner of holding Elections for Senators and Representatives, shall be prescribed in each State by the Legislature thereof; but the Congress may at any time by Law make or alter such Regulations….”

In a 1919 case involving a state statute entitled “An act granting to women the right to vote for presidential electors,” the Maine Supreme Judicial Court wrote (In re Opinion of the Justices):

“[E]ach state is thereby clothed with the absolute power to appoint electors in such manner as it may see fit, without any interference or control on the part of the federal government, except, of course, in case of attempted discrimination as to race, color, or previous condition of servitude….”