9.8 Myths about Extremist and Regional Candidates

9.8.1 MYTH: Extremist candidates will proliferate under a national popular vote.

Tara Ross has asserted that if the President were elected by a national popular vote,

“Tom Golisano’s proposal in his essay ‘Make Every State Matter’ to elect presidents on the basis of the popular vote rather than the Electoral College may sound appealing at first, but would in fact wreak havoc on our national political system in ways that he clearly does not understand.

“Put simply, the Electoral College has turned out to be one of the most brilliant innovations the Founding Fathers devised when writing the Constitution. Its virtue is that it directs our politics to the center of the political spectrum, helping us to avoid the extremism that might otherwise rule the day.

“In states that are up for grabs independent voters in the middle of the political spectrum become crucial. Since those states are usually decided by a few percentage points, the candidates must gear their messages to appeal to those ‘swing voters,’ who by definition are not strong partisans and thus open to either side.”[252] [Emphasis added]

If an Electoral College type of arrangement were essential for avoiding extremist candidates, we would see evidence of Singal’s conjectured “havoc” in elections that do not employ an Electoral College type of arrangement. However, Singal presents no evidence of “havoc” in elections in which the winner is the candidate who receives the most popular votes.

At the time the U.S. Constitution came into effect in 1789, Governors were elected in Rhode Island, Massachusetts, New Hampshire, and Connecticut. The idea of popularly electing the Governor was adopted piecemeal, on a state-by-state basis. Today, Governors are elected in 100% of the states.

After over two centuries of actual experience in over 5,000 statewide elections for state chief executive, the lack of moderation in political discourse predicted by Ross, the radicalization of politics predicted by von Spakovsky, and the “havoc” predicted by Singal have yet to materialize. History indicates that extremist candidates are almost never elected in elections in which the winner is the candidate who receives the most popular votes.

Given this historical record, there is no reason to expect the emergence of some new and currently unknown political dynamic if the President were elected in the same manner as virtually every other public official in the United States.

Candidates attempting to win any election have a strong incentive to capture “the middle” of their electorate. Counting the votes on a nationwide basis (instead of a statewide basis) would not change this imperative.

Singal provides no explanation as to why “independent voters in the middle of the political spectrum” would not be similarly “crucial” if the President were elected from a nationwide electorate.

Criticism of the National Popular Vote plan on the basis of extremism is yet another example of a criticism that is actually more appropriately applied to the current state-by-state winner-take-all system.

Segregationists such as Strom Thurmond (1948) or George Wallace (1968) won electoral votes in numerous Southern states. Neither Strom Thurmond nor George Wallace had any reasonable expectation of winning the most popular votes nationwide. Under the current state-by-state winner-take-all system, third-party candidates have 51 separate opportunities to find particular states that they might win outright or where they might be able to shift electoral votes from one major party to another.

[250] Written testimony submitted by Tara Ross to the Delaware Senate in June 2010.

9.8.2 MYTH: Regional candidates will proliferate under a national popular vote.

“What if voters in New York and Massachusetts throw all their weight behind one regional candidate?”[253]

We can easily test Ross’ hypothetical scenario about regional candidates against actual historical experience and facts.

When Governors are chosen in elections in which the winner is the candidate who receives the most popular votes, we do not see a Philadelphia Party and a Pittsburgh Party competing for the Governor’s office. There is no Eastern Shore Party in Maryland, no Upper Peninsula Party in Michigan, no Northern California Party in California, no Upstate New York Party in New York, and no Panhandle Party in Florida.

Similarly, we do not see regional parties nominating regional candidates to run for the U.S. Senate.

The reason that ordinary plurality voting has this effect is that a vote cast for a splinter candidate generally produces the politically counter-productive effect of helping the major-party candidate whose views are diametrically opposite to those of the voter.

Based on historical evidence, regional candidates are far more common under the state-by-state winner-take-all system of electing the President than in elections in which the winner is the candidate who receives the most popular votes.

Under the current state-by-state winner-take-all system of electing the President, regional segregationist candidates such as Strom Thurmond (1948) and George Wallace (1968) won electoral votes in various Southern states. None of these third-party candidates had any reasonable expectation of winning a plurality of the popular votes nationwide. The current state-by-state winner-take-all system encourages regional candidacies because such candidates can win certain states outright or can affect the national outcome by shifting electoral votes from one major party to another. The current system gives regional candidates the hope of being able to throw the presidential election into the U.S. House of Representatives or to bargain with the major party candidates before the meeting of the Electoral College in mid-December.

[253] Oral and written testimony presented by Tara Ross at the Nevada Senate Committee on Legislative Operations and Elections on May 7, 2009.

[254] In Florida and New Hampshire in 2000, Ralph Nader received considerably more votes than the margin between George W. Bush (the winner of these two states) and Al Gore (the second-place candidate).

[255] In North Carolina in 2008, Bob Barr (the Libertarian candidate) received considerably more votes than the margin between Barack Obama (the winner of the state) and John McCain (the second-place candidate).

Of the 57 presidential elections between 1789 and 2012, there have been four elections in which the candidate with the most popular votes nationwide did not win the Presidency (table 1.22).

The election of 1888 between Democrat Grover Cleveland and Republican Benjamin Harrison was one of four such elections.

Trent England (a lobbyist opposing the National Popular Vote compact and Vice-President of the Evergreen Freedom Foundation of Olympia, Washington) has written:

“Because of the Electoral College, Cleveland’s intense regional popularityeven when it gave him a raw total majoritywas not enough to win the presidency.

Figure 9.2 shows the distribution of electoral votes in the 1888 presidential election. Democrat Grover Cleveland’s states are shown in black, and Republican Benjamin Harrison’s states are thatched. The white parts of the map represent territories that were not states in 1888. 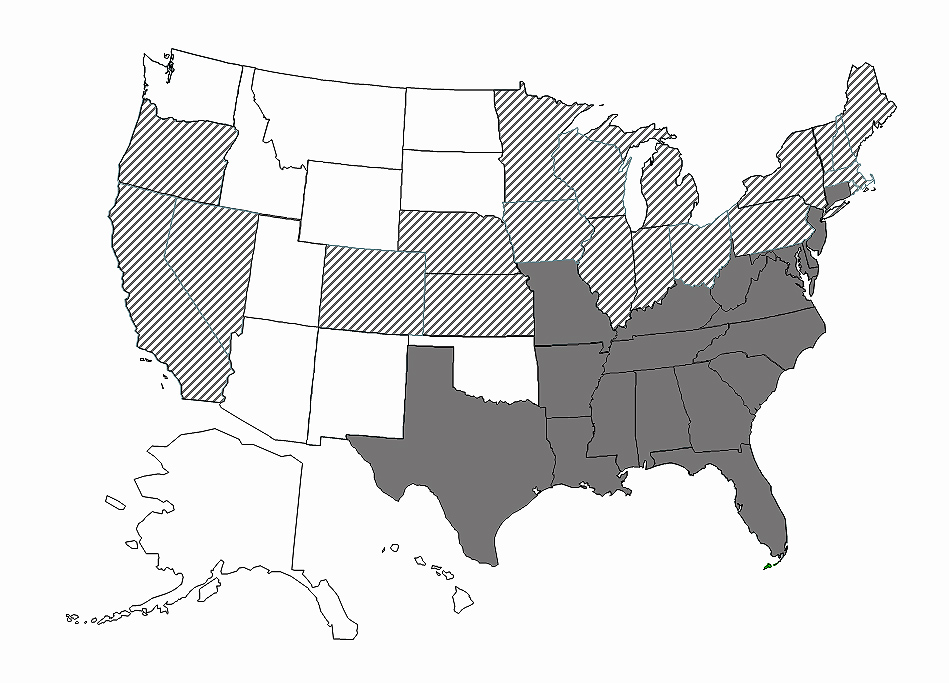 It is certainly true that figure 9.2 shows that the states (in black) carried by the candidate who received the most popular votes nationwide (Grover Cleveland) were concentrated regionally.

However, as the same figure shows, it is equally true that the states (thatched) carried by the second-place candidate (Benjamin Harrison) were regionally concentrated.

Moreover, given that Grover Cleveland was a conservative (as evidenced by his record as President starting in 1885 and again in 1893), one wonders how the “wrong winner” outcome of the 1888 election supports Trent England’s claim that “the Electoral College works as a check against  radicalism?”

As shown in figure 9.3, the regional pattern of the 1880 election was almost identical to that of the ClevelandHarrison election. In figure 9.3, 1880 Democratic nominee Winfield Hancock’s states are shown in black, and Republican nominee James Garfield’s states are thatched. Indeed, most of the post-Civil-War elections evidenced a regional pattern similar to that of figures 9.2 and 9.3. 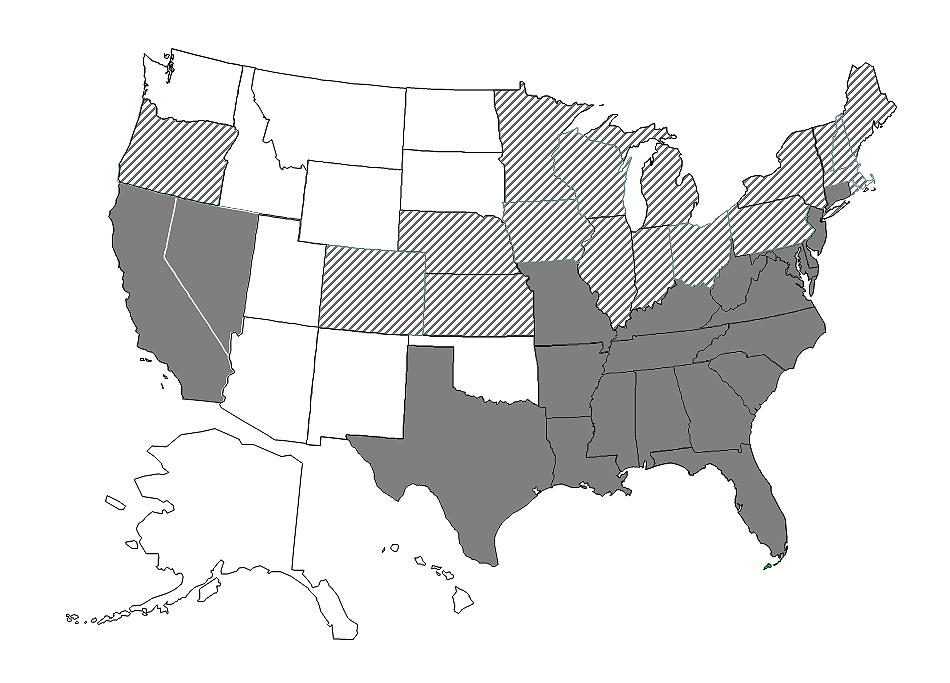 How is Trent England’s claim that “the Electoral College works as a check against regionalism” illustrated by the election in 1880 of James Garfield, a manifestly regional candidate?

Figure 9.4 shows the results of the 2012 presidential election. Democrat Barack Obama’s states are shown in black, and Republican Mitt Romney’s states are thatched. 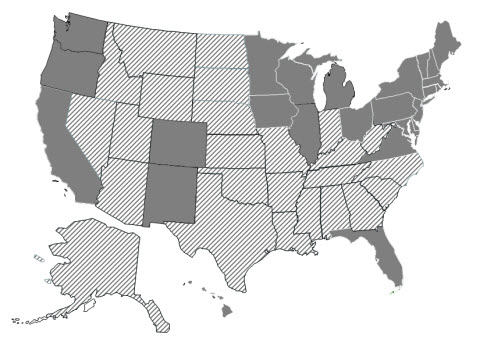 [256] England, Trent. What Grover learned at (the) Electoral College: American politics are more inclusive, moderate, stable, and nationally unified because of the Electoral College. December 15, 2009. http://www.saveourstates.com/2009/what-grover-learned-at-the-electoral-college/.