9.17 Myths about Mob Rule, Demagogues, and the Electoral College Buffering against Popular Passions

In case anyone thinks it is appropriate to characterize the American electorate as a “mob,” it is now long-settled political reality that the “mob” rules in American presidential elections.

The choice presented by the National Popular Vote is not whether the “mob” is going to control presidential elections, but whether the mob’s votes are going to be tallied on a state-by-state basis versus a nationwide basis.

The National Popular Vote bill is concerned with the relative political importance of popular votes cast in different states for presidential electors. The currently prevailing winner-take-all method (i.e., awarding all of a state’s electoral votes to the candidate who receives the most popular votes in a state) makes votes unequal from state to state. Under the current system, presidential candidates concentrate their attention on voters in a small handful of closely divided battleground states, while ignoring voters in all the other states.

The National Popular Vote plan would address the shortcomings of the current system by making every vote equally important in every state in every presidential election.

9.17.2 MYTH: The Electoral College acts as a buffer against popular passions.

This myth apparently originates from the failure (by some) to realize that the Electoral College currently does not act as a buffer against popular passions—and indeed never has.

It is true that the Founding Fathers intended that the Electoral College would provide a buffer against the will of the people. They envisioned an Electoral College that would consist of “wise men” who would deliberate on the choice of the President and “judiciously” select the best candidate for the office. As John Jay (the presumed author of Federalist No. 64) wrote in 1788:

“As the select assemblies for choosing the President … will in general be composed of the most enlightened and respectable citizens, there is reason to presume that their attention and their votes will be directed to those men only who have become the most distinguished by their abilities and virtues.”[463] [Emphasis added]

As Alexander Hamilton (the presumed author of Federalist No. 68) wrote in 1788:

“[T]he immediate election should be made by men most capable of analyzing the qualities adapted to the station, and acting under circumstances favorable to deliberation, and to a judicious combination of all the reasons and inducements which were proper to govern their choice. A small number of persons, selected by their fellow-citizens from the general mass, will be most likely to possess the information and discernment requisite to such complicated investigations.”[464] [Emphasis added]

The vision of the Founding Fathers for a deliberative Electoral College was never realized in practice, because the Founders did not anticipate the emergence of political parties (as discussed in section 2.2.2).

In the nation’s first two presidential elections (1789 and 1792), the Electoral College did not act as a buffer against popular passions but instead, acted in harmony with the virtually unanimous nationwide consensus favoring George Washington as President.

As soon as George Washington announced that he would not run for a third term as President in 1796, political parties emerged. The competition for power was between two opposing groups holding different visions about how the country should be governed.

The U.S. Supreme Court noted this history in its opinion in the 1892 case of McPherson v. Blacker:

“Doubtless it was supposed that the electors would exercise a reasonable independence and fair judgment in the selection of the chief executive, but experience soon demonstrated that, whether chosen by the legislatures or by popular suffrage on general ticket or in districts, they were so chosen simply to register the will of the appointing power in respect of a particular candidate. In relation, then, to the independence of the electors, the original expectation may be said to have been frustrated.”[466] [Emphasis added]

Since the emergence of political parties in 1796, members of the Electoral College have almost always voted for the nominees determined by the nominating caucus or convention of the elector’s own political party.

Thus, the Electoral College has never acted as a buffer against popular passions—either before or after 1796.

There is no reason to think that the Electoral College would ever operate as a buffer against the winner of a presidential election, regardless of whether the winner is determined on the basis of the state-by-state winner-take-all rule or the national popular vote.

Figure 9.6 shows the meeting of the Minnesota Electoral College in St. Paul on December 17, 2012. 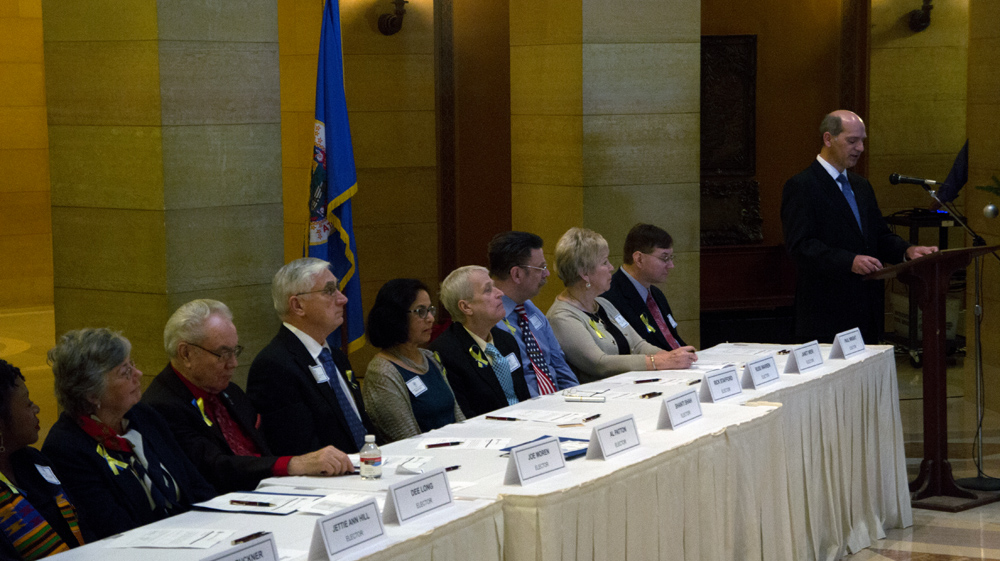 [465] A Federalist supporter famously complained in the December 15, 1796, issue of United States Gazette that Samuel Miles, a Federalist presidential elector, had voted for Thomas Jefferson, instead of John Adams, by saying, “What, do I chufe Samuel Miles to determine for me whether John Adams or Thomas Jefferfon is the fittest man to be President of the United States? No, I chufe him to act, not to think.” [Spelling per original]. Of the 22,991 electoral votes cast for President in the nation’s 57 presidential elections between 1789 and 2012, only 17 were cast in a deviant way. As explained in greater detail in section 2.12, the vote of Federalist elector Samuel Miles for Anti-Federalist Thomas Jefferson in 1796 remains the only instance when the elector might have intended, at the time he cast his unexpected vote, that his vote might affect the national outcome.

9.17.3 MYTH: The current system of electing the President would prevent a Hitler or similar demagogue from coming to power in the United States.

It is sometimes asserted that Adolf Hitler came to power in Germany as a result of a national popular vote and that the current Electoral-College system of electing the President would prevent a similar demagogue from coming to power in the United States.[467]

Adolf Hitler did not come to power in Germany as a result of a national popular vote. In fact, Hitler was rejected by almost a two-to-one nationwide popular-vote margin when he ran for the presidency of the Weimar Republic.

Because President Hindenburg did not receive an absolute majority of the votes, a run-off was held on April 10, 1932, among the top three candidates. The results of the run-off were:

On July 31, 1932, parliamentary elections were held in Germany, and Hitler’s National Socialist Party won the largest number of seats in the Reichstag (230 out of 608); however, these 230 seats were far from a majority.

On November 6, 1932, another parliamentary election was held, and the strength of Hitler’s party was reduced to 196 seats out of 608 in the Reichstag.

On January 30, 1933, a deal was orchestrated by a coalition of parties and power brokers who (mistakenly) thought they could control Hitler. As a result of this deal, President Hindenburg appointed Adolf Hitler as Chancellor of Germany. Once in power as Chancellor, Hitler quickly used his position of Chancellor (and, in particular, the control over the police that his party gained in the deal) to create a one-party dictatorship in Germany.

The National Popular Vote compact would not abolish the office of presidential elector or the Electoral College, so there would be no reduction in whatever protection (if any) that the current structure of the Electoral College might offer in terms of preventing a demagogue from coming to power in the United States.

A demagogue capable of winning the national popular vote in the United States would simultaneously win the popular vote in numerous states, including the closely divided battleground states. There is certainly nothing about the state-by-state winner-take-all method of electing presidential electors that favors or impedes demagogues compared to non-demagogic candidates. The national popular vote winner simultaneously has won a majority of the Electoral College in 53 of the nation’s 57 presidential elections from 1789 to 2012, and there is no reason to think that a demagogue would be less likely than a non-demagogic candidate to win a majority of the Electoral College while losing the nationwide popular vote.

Thus, it is unlikely that the current Electoral College system could prevent a demagogue from being elected President of the United States, regardless of whether votes for presidential elector are tallied on the basis of the state-by-state winner-take-all rule or on the basis of the total nationwide popular vote.

It is certainly conceivable that a majority of the voters might, at some time in the future, support a demagogue for President of the United States. Indeed, some supporters of the losing presidential candidate entertain this very thought after every election. However, if the voters support a demagogue, there is no reason to think that the Electoral College would save the voters from themselves—either under the current state-by-state winner-take-all rule or the National Popular Vote compact.

Ultimately, it is the responsibility of the voters to ensure that no demagogue becomes President of the United States.

[467] The issue of a demagogue becoming President comes up with moderate frequency, including at a November 13, 2012, debate on the National Popular Vote compact held at a meeting of the National Policy Council of the American Association of Retired Persons in Washington, DC. The debaters included Vermont State Representative Chris Pearson, Professor Curtis Gans, and Dr. John R. Koza (chair of National Popular Vote).