9.14 Myths about Lack of an Official National Count for Presidential Elections and Secret Elections

9.14.1 MYTH: There is no official count of the national popular vote.

It is sometimes asserted that there is no official national count of the national popular vote for President and, therefore, the National Popular Vote compact would be impossible to implement.

In his testimony on February 19, 2010, to the Alaska Senate Judiciary Committee, Professor Robert Hardaway of the University of Denver Sturm College of Law said:

“Under the Koza scheme, who would be the national official who would decide what the popular vote is?” [Emphasis added]

The answer is the same under both the current system and under the National Popular Vote compact.

Existing federal law (section 6 of Title 3 of the United States Code) requires that an official count of the popular vote for President from each state be certified and sent to various federal officials in the form of a “Certificate of Ascertainment.”

“It shall be the duty of the executive of each State, as soon as practicable after the conclusion of the appointment of the electors in such State by the final ascertainment, under and in pursuance of the laws of such State providing for such ascertainment, to communicate by registered mail under the seal of the State to the Archivist of the United States a certificate of such ascertainment of the electors appointed, setting forth the names of such electors and the canvass or other ascertainment under the laws of such State of the number of votes given or cast for each person for whose appointment any and all votes have been given or cast.” [Emphasis added]

Figure 9.5 shows the Certificate of Ascertainment from Oregon for the 2012 presidential election. 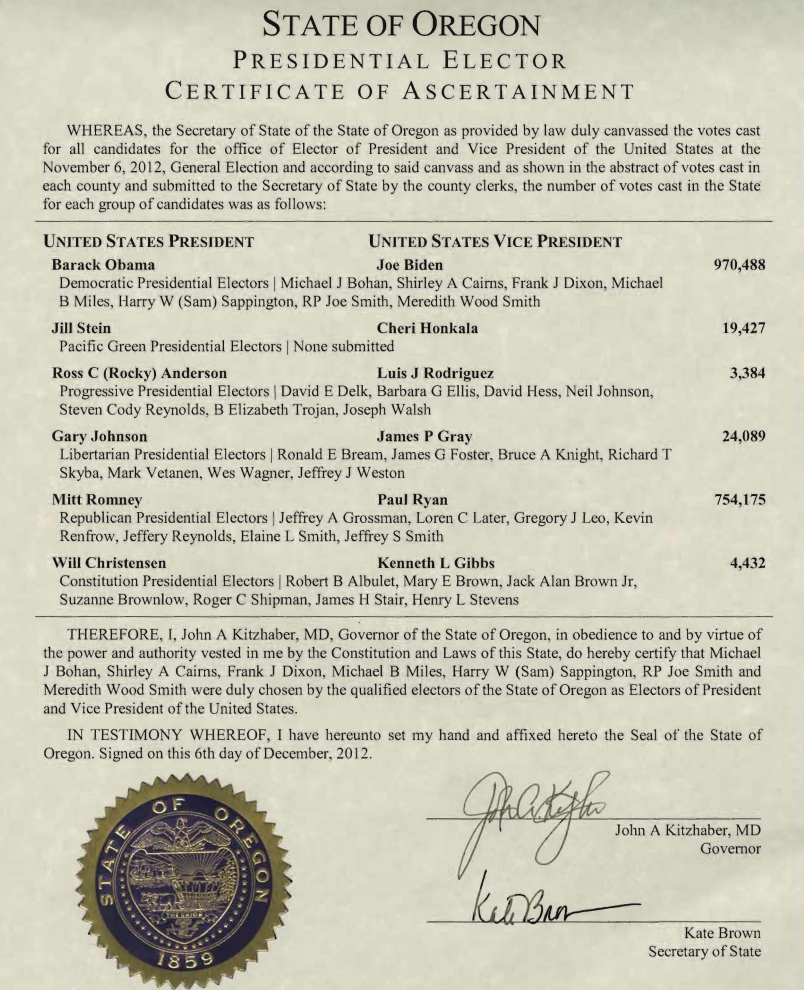 The national popular vote total for each presidential candidate can be obtained by adding together the popular vote counts from the Certificates of Ascertainment from all 50 states and the District of Columbia.

In fact, the results of this arithmetic process of adding up 51 numbers for each candidate may be viewed on the National Archives and Records Administration’s web page entitled “2012 Presidential ElectionPopular Vote Totals.”[369]

Tara Ross says that supporters of the National Popular Vote

“pretend it is possible to come up with one national vote total.” [Emphasis added]

Why does Ross think that the National Archives and Records Administration is “pretending” when it presents a spreadsheet showing the number of popular votes cast for each presidential candidate as certified by each state’s Certificate of Ascertainment?

“There is no official national popular vote number complied and certified nationally that can be used to officially and accurately determine the winner in any reasonably close election.”[370] [Emphasis added]

In particular, the 537-vote lead (out of 5,963,110 votes) recorded on Florida’s Certificate of Ascertainment in 2000 was considered “official” enough and “accurate” enough to elect a President. One wonders why Weeks thinks that these state-produced Certificates of Ascertainment (and the legal process behind the “final determinations” reported in these certificates) would suddenly become “more risky” if used to elect a President under the National Popular Vote compact. Why would they suddenly “reduce confidence?”

It has been suggested on an elections blog that a state might pass a law making its election returns secret at the precinct, local, county, and state levels:

“Couldn’t [a state] decide to turn its popular vote totals into a state secret, thereby ruining the pact? What’s to stop a state from choosing to count votes behind closed doors?”[371]

Existing federal law (section 6 of Title 3 of the United States Code) requires each state to certify the number of popular votes cast for each presidential elector in a public document, called a “Certificate of Ascertainment,” prior to the mid-December meeting of the Electoral College.

Professor Norman R. Williams of Willamette University dismisses the federal law by suggesting that presidential elections could nonetheless be conducted in secret.

“States could comply with that requirement without making their actual vote totals public, such as by releasing the vote totals only to the candidates on the condition that the totals are kept confidential until after the Electoral College meets. Such selective release would allow the losing candidate to pursue a judicial election contest, which itself could be kept closed to the public to ensure the vote total’s confidentiality, but it would frustrate the NPVC by keeping other states from knowing the official vote tally.”[373] [Emphasis added]

Professor Williams’ proposal for secret elections, secret judicial hearings, and non-disclosure agreements assumes that there is a state in which the voters have such a strong attachment to the current winner-take-all rule that they would be willing to abandon the long-standing tradition of having elections closely monitored by the media, civic groups, and challengers and observers representing the parties, candidates, and ballot propositions that happen to be on the ballot at the same time as the presidential election.[374]

Professor Williams’ proposal for conducting secret elections is a parlor game devoid of any connection to real-world political reality.

[371] In order to promote free-flowing debate of speculative ideas, the blog involved does not permit attribution.

[374] As for public attachment to the winner-take-all rule, the political reality is that the public is not attached to the winner-take-all rule. Public opinion surveys show high levels of public support for a national popular vote for President in every state for which state-level polls are available, including battleground states, small states, Southern states, border states, and other states (as itemized in section 9.24.1). Numerous polls are available on National Popular Vote’s web site at http://www.nationalpopularvote.com/polls.

9.14.3 MYTH: Absentee ballots are not counted in California when the number of absentee ballots is significantly less than the amount by which the Democratic presidential candidate is leading.

“One thing worth noting is that the true popular vote is rarely even tallied. For example, I remember hearing several times that California did not count absentee ballots because the number of absentee ballots was significantly less than the amount by which the Democratic candidate was leading. Since absentee ballots typically include military votes, the gap might have narrowed, even if wasn't even mathematically possible for the ballots to flip the state. In that case, it's possible that, as an example, Al Gore may not have won the actual popular vote. I believe there were roughly million absentee ballots not counted in California, and Gore was leading by about 500,000 votes. While that was nowhere near enough to flip the state, it might have changed the popular vote total.”[375] [Emphasis added]

Depending on a voter’s location, a typical ballot in California contains votes for between 50 and 100 individual candidates and ballot propositions, including:

Although no group of 1,000,000 absentee ballots could have eliminated Al Gore’s 1,293,774-vote lead over George W. Bush in the presidential race in California, these same 1,000,000 ballots determined the outcome of numerous other races on the ballot in November 2000.

Regardless of whether there is any doubt as to which presidential candidate received the most popular votes in California, 100% of the ballots must be counted in order to determine the outcome of the numerous other offices and propositions on the ballot.

This urban legend is absurd on its face.