Two-thirds (273 of 399) of the general-election campaign events in the 2016 presidential race were in just 6 states (Florida, North Carolina, Pennsylvania, Ohio, Virginia, and Michigan).

94% of the 2016 events (375 of the 399) were in 12 states (the 11 states identified in early 2016 as "battleground" states by Politico and The Hill plus Arizona).  This fact validates the statement by former presidential candidate and Governor Scott Walker of Wisconsin on September 2, 2015, that “The nation as a whole is not going to elect the next president.  Twelve states are.” 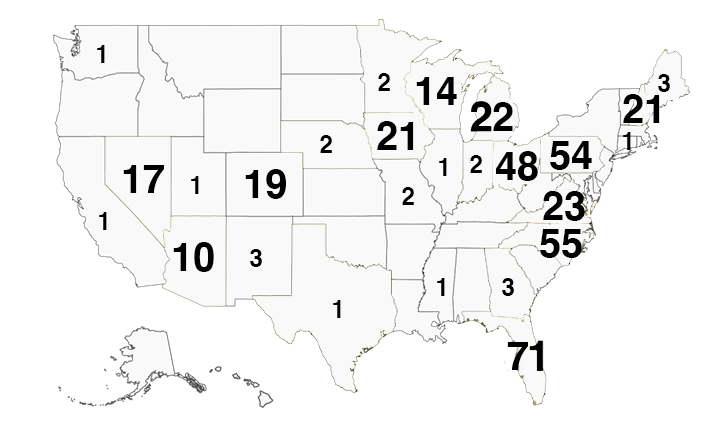 In addition to the 12 states that received 10 or more campaign events, 14 additional states received scattered attention (1, 2, or 3 events).   Eleven of these states (Georgia, Missouri, California, Washington, Texas, Mississippi, Minnesota, Indiana, Utah, New Mexico, and Connecticut) received a total of 22 Republican visits, but no Democratic visits.  Two of these states (Maine and Nebraska) were visited because those states award some of their electoral votes by congressional district.    One of these states (Illinois) received a Democratic campaign event at a large park located across the river from Davenport, Iowa (the prominent media market and population center in the area and the likely motivation for the event in Illinois).

The data on which this map is based was compiled by FairVote.  “Campaign events” are defined here as public events in which a candidate is soliciting the state’s voters (e.g., rallies, speeches, fairs, town hall meetings). This count of "campaign events" does not include visits to a state for the sole purpose of conducting a private fund-raising event, participating in a presidential debate or media interview in a studio, giving a speech to an organization’s national convention, attending a non-campaign event (e.g., the Al Smith Dinner in New York City), visiting the campaign's own offices in a state, or attending a private meeting.