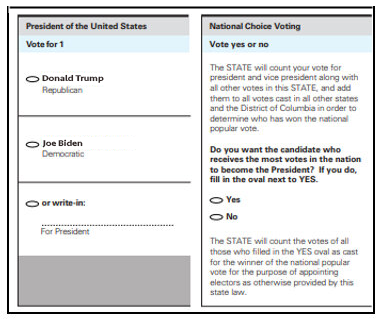 Under MEVC’s proposed “Voter Choice Ballot” (VCB), a voter would first vote for President and then vote on the Yes-No question below:

“Do you want the candidate who receives the most votes in the nation to become the President? If you do, fill in the oval next to YES.”

After the voter answers this appealingly worded yes-no question, the voter is told:

“The state will count the votes for all those who filled in the YES oval as cast for the winner of the national popular vote for the purpose of appointing electors as otherwise provided by this state’s law.”

The “Voter Choice Ballot” (VCB) has the following major flaws:

1)    VCB is confusing and highly restrictive.  Even though the Yes-No question appears to be an ordinary referendum that would take effect if it gets a majority, a mere 6% YES vote in Virginia, 4% in Minnesota, 2% in Michigan, and 1% in Pennsylvania could trigger VCB.  Moreover, in order to express support for a national popular vote for President, a voter must be  willing to have his or her vote for President transferred to the candidate the voter just voted against.

3)    MEVC simultaneously advocates two contradictory versions of VCB.  MEVC’s response to flaws of the “single-state” version of VCB is to advocate the “paired-state” version.  VCB’s raison d’être is MEVC’s pessimistic prediction that no Republican state will support a national popular vote before 2024, and that the Democrats won’t win any newly redistricted state legislatures in 2022.  But, according to MEVC’s own pessimistic prediction, no Republican state exists for such “pairing” and, therefore, there is no possibility that VCB can take effect by 2024.

4)    VCB is based on MEVC’s unsupported behavioral prediction that presidential candidates will campaign beyond the dozen or so closely divided battleground states.  However, VCB would fizzle in any election (such as 2020 and perhaps 2024) where one candidate adopts a strategy aimed at only pursuing a win in the Electoral College.

5)    The most efficient way for a candidate to win electoral votes under VCB is to redouble efforts to win popular votes in existing battleground states—not to campaign in spectator states.

6)    MEVC’s poll was not constructed so as to accurately measure voter sentiment on VCB.

7)    If a battleground state enacted VCB, it would be exchanging its current high level of attention from candidates for less attention than its population warrants.

8)    VCB would not come close to making every vote equal.

9)    VCB would not come close to guaranteeing the Presidency to the national popular vote winner.

10)    Enacting VCB in a politically balanced pair of states would be exquisitely difficult to execute.

11)    VCB would not enlarge the universe of supporters of a national popular vote for President.  VCB would hinder enactment of NPV by shifting the debate from the shortcomings of the current system to the differences between NPV and a confusingly similar alternative.  The numerous valid arguments against VCB will inevitably be remembered and inappropriately attributed to NPV.

12)    MEVC’s unjustified attacks on the constitutionality of the National Popular Vote Compact are not only false, but, if true, would apply equally to VCB.

13)    MEVC has refused to debate VCB, except under constraints that prohibit criticism of VCB.

Click here for detailed discussion (updated April 12, 2021) of the flaws of the Voter Choice Ballot.